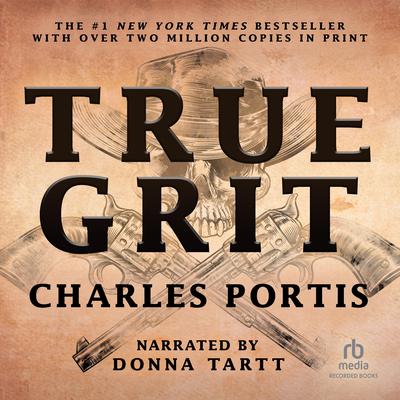 Mattie Ross, a fourteen-year-old girl from Dardanelle, Arkansas, sets out to avenge her Daddy who was shot to death by a no-good outlaw. Mattie convinces one-eyed "Rooster" Cogburn, the meanest U.S. marshal in the land, to ride along with her. In True Grit, we have a true American classic, as young Mattie -- as vital as she is innocent -- outdickers and outmaneuvers the hard-bitten men of the trail in a legend that will last through the ages.

Favorite book of all time: "True Grit by Charles Portis.” —George Pelecanos, New York Times bestselling author
“Gilded with literary quality that can delight book lovers as well as bookkeepers.” —Time
“Skillfully constructed, a comic tour de force.” —New York Times Book Review
“Portis has made an epic and a legend. Mattie Ross should soon join the pantheon of America’s legendary figures such as Kit Carson, Wyatt Earp, and Jesse James.” —Washington Post
“[A] slender, hugely enjoyable masterpiece.” —Independent (London)
“Much of True Grit’s humor comes from the severity, the biblical humorlessness, of its elderly narrator and her younger self, each an anachronism in her own or any time…[Portis is] no mere ‘cult writer.’ Like the finest comic writers, his understanding that most things are ridiculous lends a special gravity to the things he knows are not.” —Barnes&Noble.com
“Portis’ masterly novel is constantly at play with the genre. Our narrator isn’t a big strong man but a woman in her middle years reflecting on her coming-of-age. The book’s hero, Rooster Cogburn, fits the type—gunslinger and killer with a hunger for justice—except he is also a tenderhearted buffoon with a drinking problem. The novel’s triumph isn’t its almost comedic plot but its salty, frontier parlance. The genre’s most endearing novel—if you read just one Western in your life, read this one.” —Publishers Weekly

Charles Portis (1933–2020) was an American author best known for his classic Western True Grit and the novel Norwood, both of which were made into major motion pictures. He served in the US Marine Corps during the Korean War and then attended the University of Arkansas. As a reporter, he wrote for the New York Herald Tribune and was also its London bureau chief. His first novel, Norwood, was published in 1966 and True Grit in 1968. His other novels include Masters of Atlantis, The Dog of the South, and Gringos.