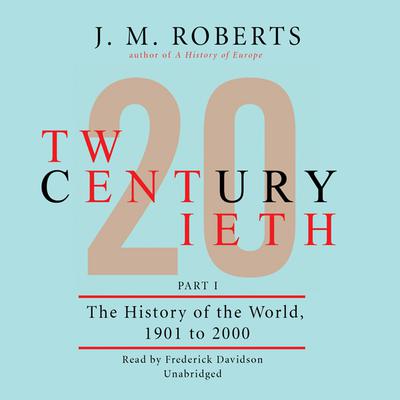 J. M. Roberts, one of our greatest historians, brings us an engrossing one-volume history of the extraordinary century we’ve just lived through. Going beyond a traditional chronological narrative of events, Roberts identifies the major long-term changes that underlie them, pointing in particular to worldwide increases in life expectancy; major advances in science and technology; the radical reconfiguration of the global economy; the disappearance of empires; the decline of white hegemony; and the changing role of women.

“Brilliant…has all the breathtaking sweep and confident judgment of his previous work…A challenging and exacting read, Twentieth Century is destined to be a classic.” —Amazon.com
“Roberts’ great strength…is his ability to identify the cultural myths that people embrace, myths that have inspired as well as retarded human progress…[An] illuminating work of scholarship by a skilled and savvy historian.” —Kirkus Reviews
“Davidson’s splendid British accent adds an air of authority to the unvoiced reading. He comes across as ‘the learned professor’ who is enthusiastic about his subject. His pace of presentation and structure of the text both facilitate note taking.” —Kliatt