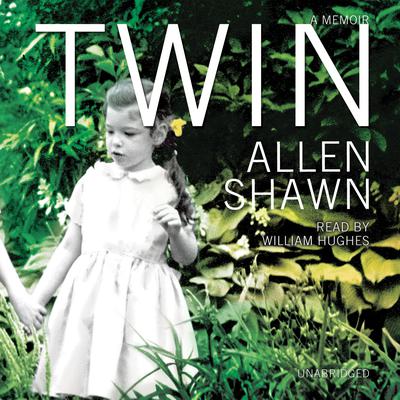 When Allen Shawn and his twin sister, Mary, were two years old, Mary began exhibiting signs of what would be diagnosed years later as autism. Understanding Mary and making her life a happy one appeared to be impossible for the Shawns. With almost no warning, her parents sent Mary to a residential treatment center when she was eight years old. She never lived at home again.

Fifty years later, as he probed the sources of his anxieties in Wish I Could Be There, Allen realized that his fate was inextricably linked to his sister’s and that their natures were far from being different.

Twin highlights the difficulties American families coping with autism faced in the 1950s. Allen also examines the secrets and family dramas as his father, William, became editor of the New Yorker. Twin reconstructs a parallel narrative for the two siblings, who experienced such divergent fates yet shared talents and proclivities. Wrenching, honest, understated, and poetic, Twin is at heart about the mystery of being inextricably bonded to someone who can never be truly understood.

“Deeply compassionate…A book that combines the sympathetic insight of Oliver Sacks’ writings with Joan Didion’s autobiographical candor and Mary Karr’s sense of familial dynamics—a book that leaves the reader with a haunting sense of how relationships between brothers and sisters, and parents and children, can irrevocably bend the arc of an individual’s life, how childhood dynamics can shape one’s apprehension of the world…This deeply affecting book, like the author’s music, is both a love letter to his twin sister and an intimate reconstruction of the toppling emotional dominoes that her institutionalization set in play in their family more than half a century ago.” —New York Times
“Unflinching and compelling…movingly conveys the solace of reconnecting with his lost sister and delving into ‘how people bear and express the imprints left on them by others.’” —Los Angeles Times
“Whether he’s remembering Mary, the deaths of his parents, or his studies with Nadia Boulanger and other great musicians, Shawn writes poetically with honesty and empathy.” —Publishers Weekly
“Shawn’s moving work brings us closer to understanding a diagnosis that, by its nature, challenges family bonds.” —Booklist

Allen Shawn grew up in New York. He currently lives in Vermont and teaches at Bennington College. As a composer, he has produced a large catalog of orchestral, chamber, and piano works, as well as scores for ballet, theater, and film. He performs frequently as a pianist, and he has written for the Atlantic Monthly, the Times Literary Supplement, the New York Times Magazine, and other publications.