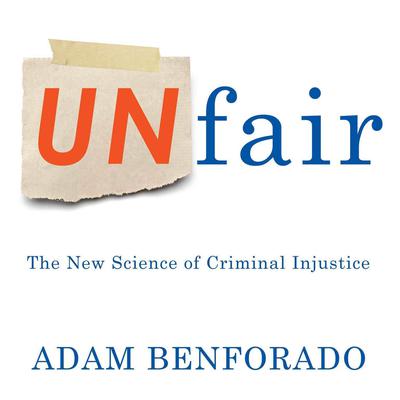 Our nation is founded on the notion that the law is impartial, that legal cases are won or lost on the basis of evidence, careful reasoning, and nuanced argument. But they may, in fact, turn on the camera angle of a defendant's taped confession, the number of photos in a mug shot book, or a simple word choice during a cross-examination.

In Unfair, law professor Adam Benforado shines a light on this troubling new research, showing, for example, that people with certain facial features receive longer sentences and that judges are far more likely to grant parole first thing in the morning. In fact, over the last two decades, psychologists and neuroscientists have uncovered many cognitive forces that operate beyond our conscious awareness—and Benforado argues that until we address these hidden biases head-on, the social inequality we see now will only widen, as powerful players and institutions find ways to exploit the weaknesses in our legal system.

Weaving together historical examples, scientific studies, and compelling court cases—from the border collie put on trial in Kentucky to the five teenagers who falsely confessed in the Central Park Jogger case—Benforado shows how our judicial processes fail to uphold our values and protect society's weakest members. With clarity and passion, he lays out the scope of the problem and proposes a wealth of reforms that could prevent injustice and help us achieve true fairness and equality before the law.

“Benforado has written a book that will make you rethink everything you believe about crime and punishment. He gracefully blends science and storytelling to make a powerful case that our failure to bring the realities of human psychology into the courtroom has led to profound injustice.” —Daniel H. Pink, New York Times bestselling author of Drive
“This book suggests that criminal justice in the United States is not a system at all but a set of dysfunctional units that deliver biased decisions that make society less safe. Benforado deftly analyzes actual cases and recent studies in psychology and neuroscience to argue for broad-based reforms…Authoritative and accessible.” —Library Journal (starred review)
“A law professor sounds an explosive alarm on the hidden unfairness of our legal system.” —Kirkus Reviews (starred review)
“As gripping as a Grisham novel, only it isn’t fiction. With captivating cases and razor-sharp science, Adam Benforado puts the justice system on trial and makes a bulletproof argument that it’s fundamentally broken. This extraordinary book is a must-read for every judge, lawyer, detective, and concerned citizen in America.” —Adam Grant, author of Give and Take
“In Unfair, Adam Benforado makes us aware of all our many imperfections…Learning so much about our subconscious biases and the judicial system that exploits them is fascinating—and deeply troubling. But he goes further: he offers obtainable solutions, ones that we should race to effect, both within our own minds and in the human fates on which we bring our minds to bear.” —Jeff Hobbs, author of The Short and Tragic Life of Robert Peace

Adam Benforado is an associate professor of law at Drexel University. A graduate of Yale College and Harvard Law School, he served as a federal appellate law clerk and an attorney at Jenner & Block. He has published numerous scholarly articles, and his op-eds and essays have appeared in a variety of publications including the Washington Post, the Philadelphia Inquirer, and Legal Times. He lives in Philadelphia with his wife and daughter.