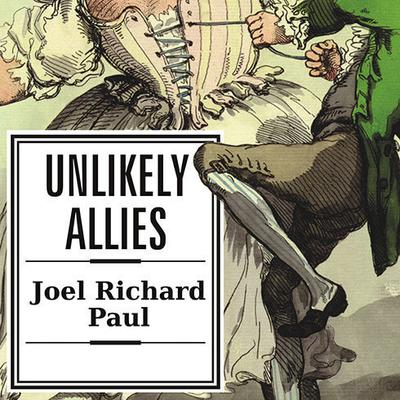 Unlikely Allies: How a Merchant, a Playwright, and a Spy Saved the American Revolution

Unlikely Allies is the story of three remarkable historical figures. Silas Deane was a Connecticut merchant and delegate to the Continental Congress as the American colonies struggled to break with England. Caron de Beaumarchais was a successful playwright who wrote The Barber of Seville and The Marriage of Figaro. And the flamboyant and mysterious Chevalier d'Eon—officer, diplomat, and sometime spy—was the talk of London and Paris. Is the Chevalier a man or a woman? When Deane is sent to France to convince the French government to support the revolutionary cause, he enlists the help of Beaumarchais. Together, they successfully smuggle weapons, ammunition, and supplies to New England just in time for the crucial Battle of Saratoga, which turned the tide of the American Revolution. And the catalyst for Louis XVI's support of the Americans against England was the Chevalier d'Eon, whose decision to declare herself a woman helped to lead to the Franco-American alliance. These three people spin a fascinating web of political intrigue and international politics that stretches across oceans as they ricochet from Versailles to Georgian London to the Pennsylvania State House (now Independence Hall) in Philadelphia. Each man has his own reasons for wanting to see America triumph over the British, and each contends daily with the certainty that no one is what they seem. The line between friends and enemies is blurred, spies lurk in every corner, and the only way to survive is to trust no one. An edge-of-your-seat story full of fascinating characters and lavish with period detail and sense of place, Unlikely Allies is Revolutionary history in all of its juicy, lurid glory.

[A] keen, intriguing assessment of how personal politics might play out on the international stage. —Kirkus
“An engaging and entertaining account of three of the most colorful characters involved in the American Revolution. It is hard to believe that their story is true, but it is.” —Gordon S. Wood, author of the Pulitzer Prize–winning The Radicalism of the American Revolution
“Ever tire of worshipful accounts of the Founding Fathers’ wisdom and fortitude? Then try this wonderful book about how an American businessman and two Frenchmen, a dramatist and a spy, came to their aid. A rollicking romp as well as a serious history, it reminds us of the role of duplicity, hypocrisy and corruption, and of human frailty and chance, in safeguarding the American revolution.” —William Taubman, Pulitzer Prize–winning author of Khrushchev: The Man and His Era
"Unlikely Allies is an amazing story compellingly told. I kept turning the pages in eagerness to find out what would happen next. Conspiracies abounded, and hardly anyone was what he or she seemed. If the eighteenth century in Europe was an era of Enlightenment, it was also an Age of Deception. Yet thanks to Joel Paul’s sympathetic portrayal, Silas Deane emerges as an unsung hero of the American Revolution.” —Robert A. Gross, Bancroft Prize–winning author of The Minutemen and Their World
“Rollicking and surprising, this is history as it really happened—as it was made by all-too-human actors. Unlikely Allies is a lively read and an important counterpoint to Founder hagiography.” —Evan Thomas, bestselling author of John Paul Jones

Joel Richard Paul is the author of Without Precedent: Chief Justice John Marshall and His Times and Unlikely Allies: How a Merchant, a Playwright and a Spy Saved the American Revolution, which was named one of the best books of 2009 by the Washington Post. He studied at Amherst College, the London School of Economics, Harvard Law School, and the Fletcher School of Law and Diplomacy. He is an instructor and associate dean at the University of California Hastings School of Law, where he teaches courses in constitutional law, foreign relations, and economic law.