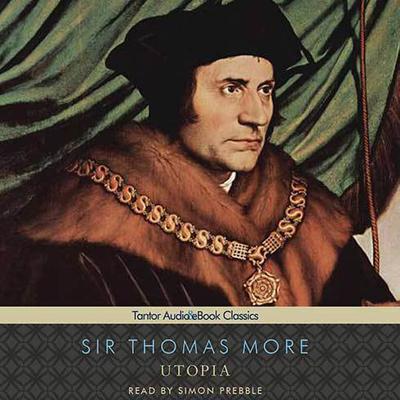 Sir Thomas More's Utopia has spurred debate, reflection, and critical thinking since its original publication in the sixteenth century. More's fictional island of Utopia provides an exploration of issues that shook him and his contemporaries and that continue to be problematic in the modern day. The details of More's utopian society, such as the permissibility of euthanasia and comments on chastity in the priesthood, combine with proposals of coexisting varied religions to put forth a work that incorporates the totality of More's religious, sociological, and philosophical talents. This version of Utopia is the translation by Bishop Gilbert Burnet.

Sir Thomas More (1478–1535), English statesman, lawyer, humanist, saint, poet, and author, was one of the most versatile and talented men of his age. He held important government positions, including serving as lord chancellor. Though he had been a long-time friend of King Henry VIII, he was a staunch Catholic and could not accept the king’s demand that all subjects acknowledge the king above the pope, resulting in his execution in 1535. With his writing of Utopia, he takes his place with the most eminent humanists of the Renaissance.

Sir Thomas More (1478–1535) was an English lawyer, social philosopher, author, statesman, and noted Renaissance humanist. He was an important counselor to Henry VIII of England, and for three years toward the end of his life he was Lord Chancellor. He is also recognized as a saint within the Catholic Church and in the Anglican Communion. More was an opponent of the Protestant Reformation and of Martin Luther and William Tyndale. Best known for his masterpiece Utopia, More is also the author of The History of King Richard III, A Dialogue Concerning Heresies, and Treatise on the Blessed Body.