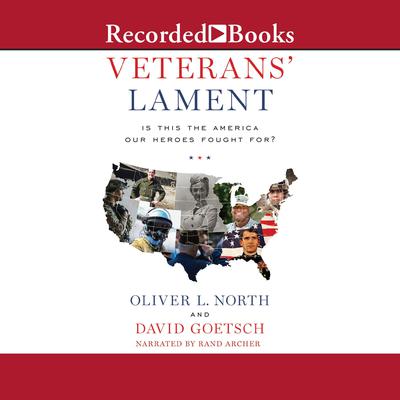 Veteran's Lament: Is This the America Our Heroes Fought For?

By Oliver North  and David Goetsch
Read by Rand Archer

Based on interviews of military veterans by the authors, this book explains why so many of our American military heroes—those willing to put their lives on the line to protect the United States—now question if our nation is still the country they fought for.

What is happening to our country? This question is heard more and more frequently these days as Americans worry about the unrelenting attacks by so-called progressives on the foundation, core values, and history of our nation. Nobody is more concerned than those Americans who volunteered to serve in uniform and willingly put their lives on the line to protect the United States and all it represents. Based on interviews by the authors, this book explains why many of our American heroes believed in and loved our nation enough to go into harm’s way to defend it, and why so many of them now question if America is still the country they fought for. More importantly, it asks—is America still worth fighting for?

Oliver North is a combat-decorated Marine, the recipient of the Silver Star, the Bronze Star for valor, and two Purple Hearts for wounds in action. From 1983 to 1986 he served as the US government’s counter-terrorism coordinator on the National Security Council staff. President Ronald Reagan described him as “an American hero.” A New York Times bestselling author, syndicated columnist, and host of the award-winning War Stories documentary series on the FOX News Channel, North lives with his wife, Betsy, in Virginia.