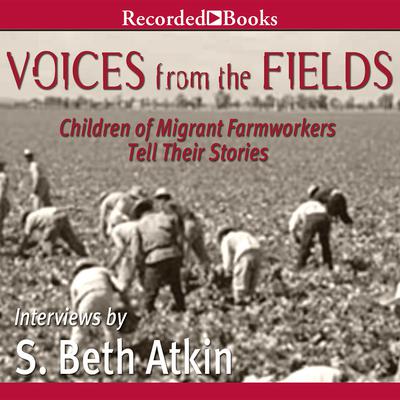 Voices from the Fields: Children of Migrant Farmworkers Tell Their Stories

In this unique collection of interviews and poems, voices few Americans have ever heard speak out. Nine Mexican-American children from California's Salinas Valley share their experiences as migrant workers caught between two cultures. Working in the fields and encountering the challenges of gangs and prejudice, these kids emphasize the vital importance of family. They also speak of struggling for an education so their generation won't be limited to manual labor. Poems in Spanish and in English illuminate the themes in a book Publishers Weekly calls "a well-rounded, moving look at a small, struggling group." S. Beth Atkin is a California author of an ALA Best Book for Young Adults on former gang members. Her Voices from the Fields-a Hungry Mind Review Book of Distinction-has received multiple starred reviews and widespread critical acclaim. "Immediate and profound . This book gives a voice to children who are rarely acknowledged and even more rarely heard."-Booklist, starred review "Even in the darkest situation, a sense of self-worth, ethnic pride, family, and hope shines through . a thoughtful tribute to the migrant experience."-School Library Journal, starred review