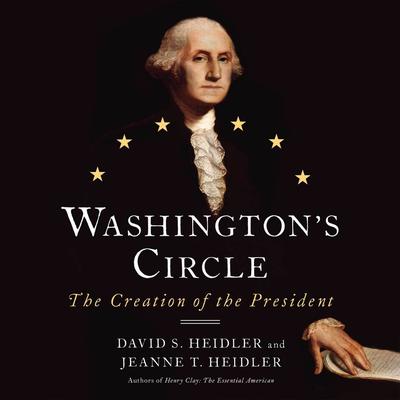 Washington's Circle: The Creation of the President

George Washington was a singular, often aloof man who sought out the counsel of a few, trusted men to help him share his task of governing a new nation. In Washington's Circle, David and Jeanne Heidler introduce not just the president but the group of extraordinary men who advised him. The familiar names are here like the often irked and occasionally irksome John Adams, the scheming Alexander Hamilton, and the prodigiously talented James "Jemmy" Madison, but so are the lesser known Edmund Randolph, John Jay, and Gouverneur Morris. Washington's choices of who to listen to, for better and sometimes worse, were as consequential as the advice his cabinet gave. It is a story of give and take between Washington and Congress, these men confronted the questions, including the limits of executive power, that continue to raise debates today.

“Traditional accounts portray George Washington as a solitary actor in the drama of American nationhood, as chilly and featureless as the marble shaft that dominates his namesake capitol. In fact, he was the intensely human lead in one of history’s most colorful, and contentious, ensembles. David S. Heidler and Jeanne T. Heidler bring the whole cast to unforgettable life in this character study–cum–group portrait–cum–old-fashioned page-turner. Readers are in for a treat!” —Richard Norton Smith, Pulitzer Prize finalist and author of On His Own Terms: A Life of Nelson Rockefeller
“George Washington was the outstanding man of his age, but though he may have been a rock he was no island. Throughout his life he depended on a select circle of family and friends to support and advise him through the many challenges he faced. Never were these relationships more important than during Washington’s two terms as president of the United States. David and Jeanne Heidler do a superb job of illuminating the remarkable group of talented individuals who undertook an equally remarkable collaboration to found the United States.” —Edward G. Lengel, author of General George Washington: A Military Life and director, the Papers of George Washington, University of Virginia
“An elegant study on the shaping of the first presidency through the excellent people he chose to serve with him. The Heidlers…create a fully fleshed portrait of the first great Founder by comparison to and contrast with the many complicated personalities he had around him…A fluid work of historical research and engaging biography.” —Kirkus Reviews

David S. Heidler and Jeanne T. Heidler have written numerous scholarly books and articles dealing with the history of the early American republic, the Antebellum period, and the Civil War. They are the authors of the acclaimed biography Henry Clay: The Essential American. David S. Heidler taught history for many years at the university level, and Jeanne T. Heidler is a professor of history at the United States Air Force Academy, where she is the senior civilian member of her department.