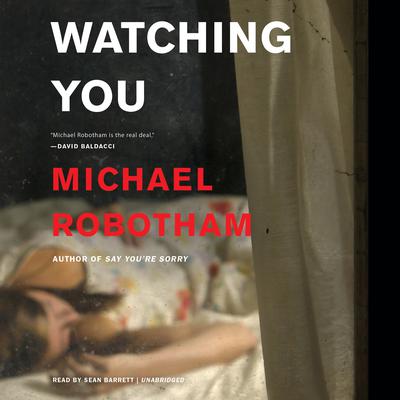 Before I Go to Sleep meets When a Stranger Calls in Robotham's taut and nuanced new thriller.

Marnie Logan often feels like she's being watched: a warm breath on the back of her neck or a shadow in the corner of her eye that vanishes when she turns her head.

Now her life is frozen. Her husband Daniel is missing. She can't access his bank accounts or his life insurance. Depressed and increasingly desperate, she seeks the help of clinical psychologist Joe O'Loughlin.

O'Loughlin discovers Daniel's Big Red Book—a collage of pictures, interviews, and anecdotes. The book, which Daniel intended as a surprise birthday gift, now leads to a shocking discovery. Any person who has ever crossed Marnie has paid an exacting price. And O'Loughlin may be next in line.

“Always surprising and never dull. That’s the bottom line on Michael Robotham’s psychological suspense novels, which star a sympathetic clinical psychologist named Joe O'Loughlin and feature the walking wounded on his challenging client list.” —New York Times Book Review
“Robotham slowly, expertly begins tightening the screws...Revelations increase rather than release tension until the last page...It will be a long time before memories of this one retreat back into the shadows.” —Booklist (starred review)
“A steady and commanding book with an ending that’s sure to give even the most jaded reader a shock.” —Publishers Weekly
“Robotham, an Australian-based writer who specializes in edge-of-your-seat thrillers, turns in a complicated story that centers around a group of individuals who are not what they seem…Robotham’s writing remains solid. His latest…will convert new readers and make his fans happy.” —Kirkus Reviews