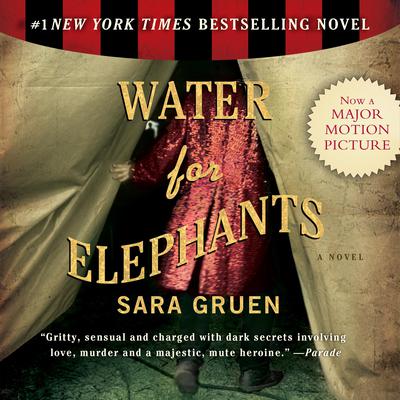 A 2007 Book Sense Book of the Year for Adult Fiction

Jacob Janowski's luck had run out—orphaned and penniless, he had no direction until he landed on a rickety train that was home to the Benzini Brothers Most Spectacular Show on Earth. A veterinary student just shy of a degree, he was put in charge of caring for the circus menagerie. It was the Great Depression and for Jacob the circus was both his salvation and a living hell. There he met Marlena, the beautiful equestrian star married to August, the charismatic but brutal animal trainer. And he met Rosie, an untrainable elephant who was the great hope for this third-rate traveling show. The bond that grew among this group of misfits was one of love and trust, and ultimately, it was their only hope for survival.

Sara Gruen is the author of the New York Times bestselling novel Water for Elephants, now a major motion picture starring Reese Witherspoon and Robert Pattinson, as well as the novels Riding Lessons, Flying Changes, and the New York Times bestseller Ape House. She shares her North Carolina home with her own version of a blended family: a husband, three children, four cats, two dogs, two horses, and a goat. She donates a portion of her earnings from all her books to various animal charities.