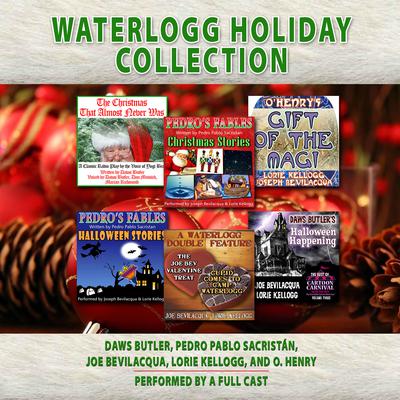 By various authors
Performed by Joe Bevilacqua and a full cast

This collection of stories features holiday tales for both young and old!

The Christmas That Almost Never Was

It is Christmas Eve at the North Pole, and Santa Claus has lost his "remembery." Now only a child who has been good for a full year can save Christmas! Producer Joe Bevilacqua has unearthed this vintage 1940s recording of the charming Yuletide children's radio play, written by and starring Daws Butler, the voice of Yogi Bear, Huckleberry Hound, Quick Draw McGraw, and most of the classic Hanna-Barbera cartoon characters. Also heard in this old time radio show is Don Messick, the voice of Boo Boo Bear, Ranger Smith, and Scooby Doo.

A new production of the classic radio play by the voice of Yogi Bear, Daws Butler!

Visit Santa at the North Pole, witness the birth of Jesus, go inside Noah's Ark, and more with these timeless short stories that will charm and entertain your whole family! Produced with wonderful sound effects and music by veteran radio theater producer Joe Bevilacqua and performed by him and his wife, Lorie Kellogg, these Christmas stories include "The Best Choice," "A Forced Christmas," "Bula the Traveler," "Christmas Presents," "The Please-O-Meter," and "The Little Christmas Star." Other stories include "The Tidy Toys," "The Match and the Toy Men," "Problems on the Ark," "A Colorful Head," "A Drop of Water," and "Balloon Acrobatics."

Goblins, fairies, witches, and ghosts! These short Halloween themed stories by noted Spanish children's author Pedro Pablo Sacristan will charm and entertain your whole family! Produced with wonderful sound effects and music by veteran radio theater producer Joe Bevilacqua, and performed by husband and wife team Joe Bevilacqua and Lorie Kellogg, the stories include "The Creature in the Attic," "A Different Take on Halloween," "Waking Nightmare," "The Evil Goblins," "The Brave Boy and the Multicolored Ghost," "The Monster in the Wardrobe,""Forever a Monster," "Bewitched Tongues," The Funny-Looking Fairy," and "The Evil Millisphore."

First is "The Joe Bev Valentine Treat." This is a charming hour of stories (real and fictional) about love hosted by veteran public radio producer Joe Bevilacqua.

The hour includes "Who's Afraid of a Virginian's Wrath," "A Valentine from Graham Nash's Mac," "Ode to a Transfer Station or Love Poem for the Dump," "A Mathematical Valentine," "The Love of Lee the Horselogger," "Marian the Librarian Finds Love at the Bookmobile," and "Valentine Vignette."

The Gift of the Magi

Daws Butler was the master of voice. His was the voice behind most of the classic Hanna-Barbera characters: Yogi Bear, Huckleberry Hound, Quickdraw McGraw, Elroy Jetson, and a hundred others. He also originated the vocal character of Cap’n Crunch and other famous Jay Ward cartoon characters. His significant work with Stan Freberg in the 1950s on The Stan Freberg Show and multimillion-selling records such as “St. George and the Dragonet” are still held in reverence today. He also ran a voice acting workshop for many years. Among his many successful students are Nancy Cartwright, the voice of Bart Simpson, and Corey Burton, from Closet Cases of the Nerd Kind.

Pedro Pablo Sacristán was born in Madrid and graduated with an MBA from a prestigious business school. His passion for education and writing led him to create Bedtime Stories, short stories that help teach kids values.

Lorie Kellogg is a busy graphic and voice-over artist as well as a skilled improv comedian. She studied painting, printmaking, and video and film at the Kansas City Art Institute and the California Institute of the Arts.