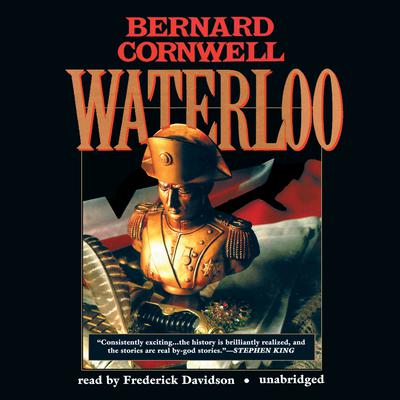 Waterloo: Richard Sharpe and the Waterloo Campaign, 15 June to 18 June 1815

With the emperor Napoleon at its head, an enormous French army is marching toward Brussels. The British and their allies are also converging on Brussels in preparation for a grand society ball, and it is up to Richard Sharpe to convince the Prince of Orange, the inexperienced commander of Wellington’s Dutch troops, to act before it is too late. But Sharpe’s warning cannot stop the tide of battle, and the British suffer heavy losses on the road to Waterloo. Wellington has few reserves of men and ammunition, the Prussian army has not arrived, and the French advance wields tremendous firepower and determination. Victory seems impossible.

In this, the culmination of Richard Sharpe’s long and arduous career, Bernard Cornwell brings to life all of the horror and exhilaration of one of the greatest military triumphs of all time.

“A marvelous mixture of fact and fiction concerning individual bravery and audacity amidst the everyday drama and turmoil of war.” —Los Angeles Herald Examiner
“Cornwell writes more gripping battle scenes than any other contemporary author.” —Kirkus