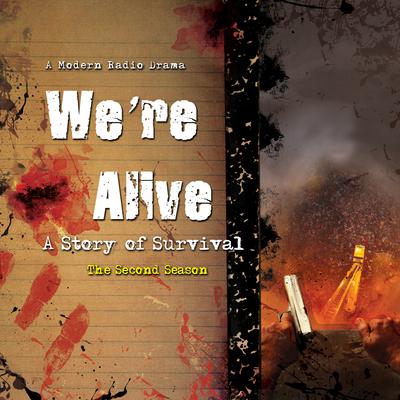 We’re Alive: A Story of Survival, the Second Season

A Story of Survival Series: Book 2

Season two of this action-packed audio drama plunges listeners back into a ravaged world of violence and terror.

The hope of a better life forces the survivors of the Tower out into the dissolving world around them. The consequences of past battles leave them struggling not only with each other but the remaining fragments of humanity.

“We’re Alive is a modern rendition of an old-school medium. Maintaining a style that is both retro and contemporary, the radio drama will give horror fans the campy, kitschy style they like, but it also provides a variety of characters and development to keep general audiences engaged…Despite not being able to see the action, the excitement and intensity is still sustained through score and sound design. In some ways, the lack of visuals to accompany the audio creates more suspense. The narrator controls how much the audience knows, slowly teasing out information. Accompanying the drama are sparse moments of comedic relief…Expressing a keen awareness of the zombie subgenre, many of the jokes come from familiar scenarios and tropes of zombie stories.” —Examiner.com
“Twelve episodes from the first year of podcasts have been remastered and enhanced. The result is a group of audio dramas with added sound effects, improved sound levels, and an absence of commercials.” —Audiofile
“Sound effects are extensive and effective in creating the atmosphere of fear among the human survivors.” —Audiofile