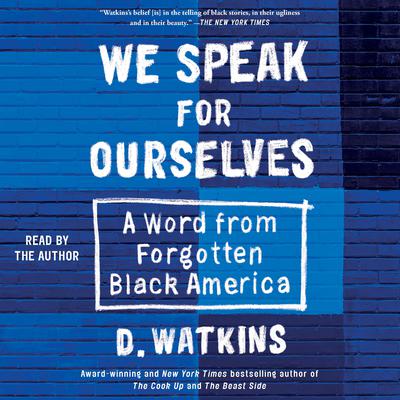 We Speak for Ourselves: A Word from Forgotten Black America

The critically lauded author of The Beast Side and The Cook Upreturns with an existential look at life in low-income black communities, while also offering a new framework for how we can improve the conversations occuring about them.

While author D. Watkins is pleased about the number of books exploring issues of race that are being published, there’s one crucial aspect of contemporary black life that doesn’t get enough attention: the hood. The Baltimore native knows firsthand what it means to live in poverty, where violence and drugs are inescapable. As he sees it, the perspective of people who live in poor black communities is largely absent from the work of many of the top intellectuals who speak and write about race.

Now, D. Watkins is here to tell his truth. Built upon Watkins's own experiences, We Speak for Ourselves eases us into the bigger conversation about race and the various issues affecting poor black neighborhoods in America. Unapologetic and eye-opening, We Speak for Ourselves identifies and addresses a range of issues affecting these low-income communities—such as the trouble with misrepresentation and why we need more than one black voice—and sheds light on the harsh realities of daily life. Additionally, Watkins examines various crucial activist movements, including the Civil Rights Movement, and asks what it means to be a model activist in today’s world.

Through the personal retelling of his journey, Watkins aims to illuminate the lessons he’s learned navigating through two very distinct worlds—the hood and the elite sanctums of the prominent black thinkers and public figures—in hopes of providing actionable solutions.

“This book is an amplifier of low income Black voices who have their own voices and have no problem using them. He dares us to listen.” —Ibram X. Kendi, National Book Award-winning author
“We Speak for Ourselves is a sharp gash into the psyche of America…Watkins avoids pretense as he puts language to his jagged experiences, not to encourage voyeurism, but to instead push people to grapple and wrestle with the real lives so many talking heads attempt to muzzle, then fictionalize.” —Jason Reynolds, National Book Award finalist
“Deep critiques of the elitism and respectability that directly and indirectly censor voices. A strong offering that brings nuance and multiplicity to readers attempting to decipher the black male urban experience.” —Kirkus Reviews

D. Watkins is editor-at-large for Salon. He’s also a college professor at the University of Baltimore and founder of the BMORE Writers Project. His work has been published in the New York Times, Guardian, Rolling Stone, and elsewhere. Watkins is the author of The Cook Up: A Crack Rock Memoir and The Beast Side: Living (and Dying) While Black in America. He lives in East Baltimore.