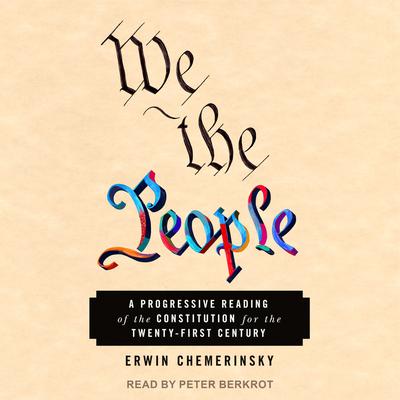 We the People: A Progressive Reading of the Constitution for the Twenty-First Century

Worried about what a super conservative majority on the Supreme Court means for the future of civil liberties? From gun control to reproductive health, a conservative court will reshape the lives of all Americans for decades to come. The time to develop and defend a progressive vision of the U.S. Constitution that protects the rights of all people is now.

University of California Berkeley Dean and respected legal scholar Erwin Chemerinsky expertly exposes how conservatives are using the Constitution to advance their own agenda that favors business over consumers and employees, and government power over individual rights.

But exposure is not enough. Progressives have spent too much of the last forty-five years trying to preserve the legacy of the Warren Court’s most important rulings and reacting to the Republican-dominated Supreme Courts by criticizing their erosion of rights—but have not yet developed a progressive vision for the Constitution itself. Yet, if we just look to the promise of the Preamble—liberty and justice for all—and take seriously its vision, a progressive reading of the Constitution can lead us forward as we continue our fight ensuring democratic rule, effective government, justice, liberty, and equality.

Erwin Chemerinsky is the dean and Jesse H. Choper Distinguished Professor of Law at the University of California, Berkeley School of Law. Prior to assuming this position, he was the founding dean of the University of California, Irvine School of Law, and a professor at Duke Law School, University of Southern California Law School, and DePaul Law School. He is the author of twelve books and over 250 law review articles. He is a contributing writer for the Opinion section of the Los Angeles Times and writes regular columns for the Sacramento Bee, the ABA Journal, and the Daily Journal and frequent op-eds in newspapers across the country. He frequently argues appellate cases, including in the United States Supreme Court. In 2016, he was named a fellow of the American Academy of Arts and Sciences. In 2017, National Jurist magazine again named him as the most influential person in legal education in the United States. In January 2021, he was named president-elect of the Association of American Law Schools.