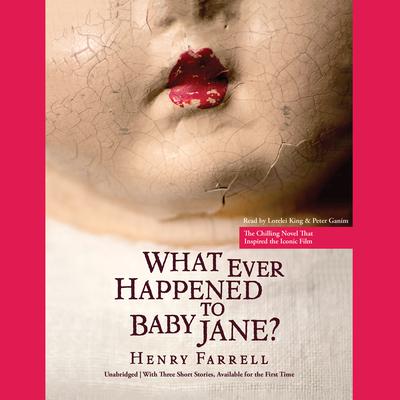 What Ever Happened to Baby Jane?

By Henry Farrell
Read by Lorelei King and Peter Ganim

The chilling novel that inspired the iconic film—with three never-before-published short stories, including What Ever Happened to Cousin Charlotte?, the basis for the film Hush…Hush, Sweet Charlotte

Once an acclaimed child star of vaudeville, Baby Jane Hudson performed for adoring crowds before a move to Hollywood thrust her sister, Blanche, into the spotlight. As Blanche's film career took off, a resentful Jane watched from the shadows as her own career faded into obscurity—until a tragic accident changed everything.

Now, years later, the two sisters live in a decaying mansion, isolated from the outside world. Crippled by the accident, Blanche is helpless under the control of her abusive sister, who is slowly descending into madness. And when Baby Jane decides it's time to revive her childhood act, she won't let anything—or anyone—stand in her way.

Henry Farrell (1920–2006) was a novelist and screenwriter. His most well-known work was the acclaimed gothic horror novel What Ever Happened to Baby Jane?, which was first released in 1960 and later adapted into a film starring Bette Davis and Joan Crawford.