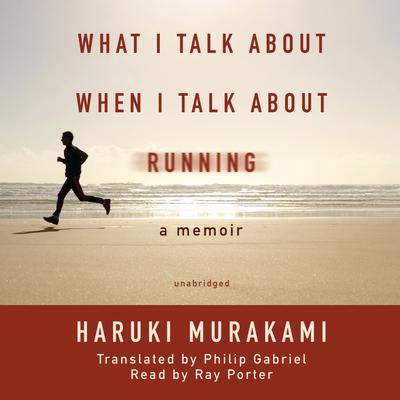 From the bestselling author of Kafka on the Shore comes this rich and revelatory memoir about writing and running and the integral impact both have made on his life. Equal parts training log, travelogue, and reminiscence, this revealing memoir covers Murakami’s four-month preparation for the 2005 New York City Marathon. Settings range from Tokyo, where he once shared the course with an Olympian, to the Charles River in Boston, among young women who outpace him. Through this marvelous lens of sport emerges a cornucopia of memories and insights: the eureka moment when he decided to become a writer, his triumphs and disappointments, his passion for vintage LPs, and the experience, after age fifty, of having seen his race times improve and then fall back.

“Murakami crafts a charming little volume notable for its good-natured and intimate tone…An early section recounting Murakami’s transition from nightclub owner to novelist offers a particularly vivid picture of an artist soaring into flight for the first time.” —Publishers Weekly
“The bestselling author of wildly imaginative novels like The Wind-Up Bird Chronicle here muses ‘in real time’ about his sport and hobby, long-distance running. While Murakami writes that he worked over the text, it seems starkly unself-conscious (or poorly translated)—as when he talks about shining his running shoes. And yet this lack of guardedness as presented in Ray Porter’s forthright and relaxed voice gives the book rare bite. Murakami isn’t pushing his running, or his prose. ‘It doesn’t matter what field you’re talking about, beating somebody else just doesn’t do it for me.’ If Murakami had a point to make, or if Porter had tried harder—had embellished the text or reached for an accent—this recording would fail. Instead it succeeds brilliantly. No secrets here, just the companionship of a dazzling intellect.” —AudioFile
“Murakami’s single-minded focus on the task at hand will impress runners and athletes of all levels…His discipline also extends to his writing, which he approaches with the simple but devoted attention of a master craftsman…as always Murakami employs his artful, lucid prose to good effect.” —Kirkus Reviews

Haruki Murakami is a Japanese author of fiction and nonfiction works. His books and stories have been bestsellers in Japan as well as internationally, with his novel Colorless Tsukuru Tazaki and His Years of Pilgrimage topping the New York Times bestsellers list in 2014. His work has been translated into more than fifty languages. Murakami is the recipient of numerous awards, including the World Fantasy Award, the Frank O’Connor International Short Story Award, the Franz Kafka Prize, and the Jerusalem Prize.