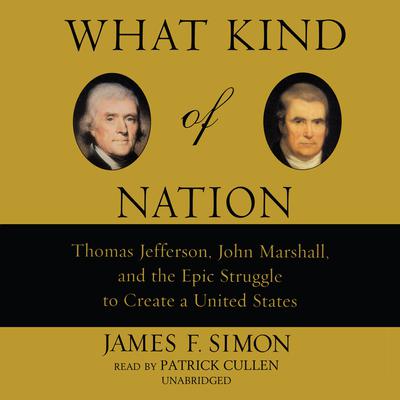 What Kind of Nation: Thomas Jefferson, John Marshall, and the Epic Struggle to Create a United States

The bitter and protracted struggle between President Thomas Jefferson and Supreme Court Chief Justice John Marshall defined the basic constitutional relationship between the executive and judicial branches of government. More than 150 years later, their clashes still reverberate in constitutional debates and political battles.

In this dramatic and fully accessible account of these titans of the early republic and their fiercely held ideas, James F. Simon brings to life the early history of the nation and sheds new light on the highly charged battle to balance the powers of the federal government and the rights of the states. A fascinating look at two of the nation's greatest statesmen and shrewdest politicians, What Kind of Nation presents a cogent, unbiased assessment of their lasting impact on American government.

“A model of narrative history written by someone who knows the law.”  —Joseph J. Ellis, New York Times Book Review
“Simon’s book illumines the origins of a national political debate that continues today.” —Publisher’s Weekly
“Simon’s excellent venture in legal and political history illuminates both the roots of an ongoing controversy and the characters of two great historic figures.” —Kirkus Reviews
“The narrative requires clarity and balance, and Patrick Cullen’s delivery provides both.” —AudioFile

James F. Simon is the Martin Professor of Law at New York Law School. A former correspondent and contributing editor at Time magazine and the author of several critically acclaimed books on judicial history, including The Antagonists and The Center Holds, he lives with his wife in West Nyack, New York.