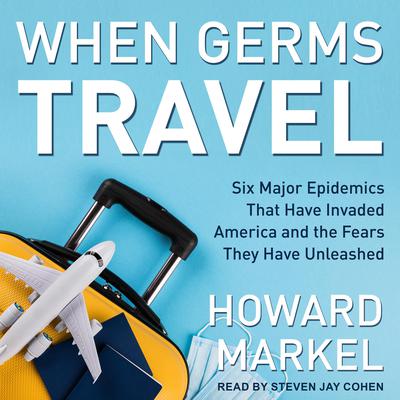 When Germs Travel: Six Major Epidemics That Have Invaded America and the Fears They Have Unleashed

The struggle against deadly microbes is endless. Diseases that have plagued human beings since ancient times still exist, new maladies make their way into the headlines, we are faced with vaccine shortages, and the threat of germ warfare has reemerged as a worldwide threat.

In this riveting account, medical historian Howard Markel takes an eye-opening look at the fragility of the American public health system. He tells the distinctive stories of six epidemics—tuberculosis, bubonic plague, trachoma, typhus, cholera, and AIDS—to show how our chief defense against diseases from outside the United States has been to attempt to deny entry to carriers. He explains why this approach never worked, and makes clear that it is useless in today's world of bustling international travel and porous borders.

Illuminating our foolhardy attempts at isolation and showing that globalization renders us all potential inhabitants of the so-called Hot Zone, Markel makes a compelling case for a globally funded public health program that could stop the spread of epidemics and safeguard the health of everyone on the planet.

Howard Markel, MD, PhD, is the George E. Wantz Distinguished Professor of the History of Medicine at the University of Michigan. He is the author of several award-winning books and is a frequent contributor to the PBS NewsHour, the New York Times, andthe New Yorker. He is a Guggenheim Fellow and a member of the National Academy of Medicine.