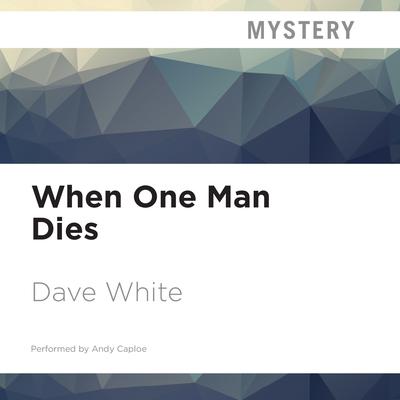 When One Man Dies

The critically acclaimed and multi award-nominated first book in the Jackson Donne series, a riveting, gritty thriller from one of the brightest new crime writers working today.

A hit and run. Simple as that. And suddenly harmless old Gerry Figuroa is lying dead on the asphalt. New Jersey cop turned private investigator Jackson Donne sure as hell doesn't want to investigate his drinking buddy's death, but he's made a promise that leaves him no choice. And before long, he's drawing uncomfortably close to a murderer.

Meanwhile, an apparently routine divorce case takes a dangerous turn, and sinister connections to Gerry's death start to emerge. Just when it seems things can't get any worse, Donne learns that a bitter old enemy is mixed up in the whole mess. Bill Martin, his Narcotics Department ex-partner, has secrets to expose that could reopen the still-aching wounds of Donne's past. Permanently.

Donne would like nothing better than to crawl back into a bottle and forget he ever heard Gerry Figuroa's name, but it's too late for that. Now he's in way too deep, tangled up in a plot whose tendrils reach far into his town's past—and his own.