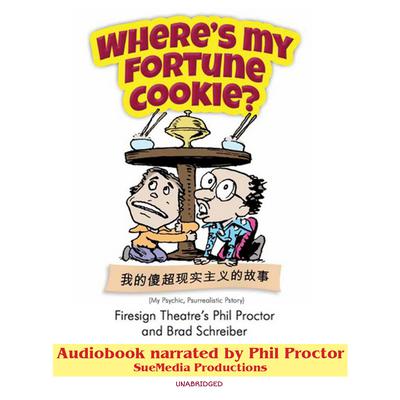 This hilarious, startling biography of Phil Proctor, cofounder of the legendary satirical comedy group, the Firesign Theatre, is read by Phil and includes sound elements illustrating his work in comedy recordings, TV, film, and even the Broadway stage—with new moments recorded by Phil and added to the audiobook edition.

Listen as Phil shares the unique moments of his life that led to these Grammy-nominated comedy albums, being a regular on the Rugrats, and a nightclub entertainer.

“It is clever, hip, and hilarious…Told with the humor and general smart-ass wit associated with the Firesign Theatre.” — Counterpunch
“I met Phil Proctor when I was just a small, feral child living in the woods on grubs and berries. He took me in, raised me as his own, and taught me how to be funny. The fact that my entire childhood was omitted from Phil’s otherwise complete and compelling memoir is disconcerting to say the least, but it’s still a fascinating read, I guess.” —“Weird Al” Yankovic, Grammy Award–winning comedian and singer
“I used to hitchhike around the country, following Proctor and Bergman to see their shows. Phil finally took a liking to me and gave me important advice about showbiz that still serves me today. That advice is sprinkled through this book. Read it.” —Penn Jillette, magician and entertainer

Phil Proctor is an original member of the three-time Grammy-nominated Firesign Theatre. He has performed on stage, television, through interactive games, and in film, including the Emmy Award–winning Rugrats, Finding Nemo, Monsters, Inc., and the Dr. Doolittle films. He is part of Los Angeles’ celebrated Antaeus Classical Ensemble.

Brad Schreiber has written or cowritten several books, including Becoming Jimi Hendrix, which was selected for the Rock & Roll Hall of Fame Library. He created the truTV series North Mission Road, based on his book Death in Paradise. He also writes for the Huffington Post and was a National Press Foundation fellow. He is a visiting professor of nonfiction at University of Wisconsin–Madison.