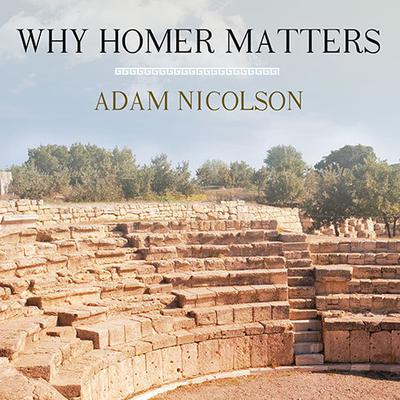 An Economist Best Book of 2014

One of the Telegraph (London) Best Books of 2014

One of Kirkus Reviews’ Best Books of 2014 in Nonfiction

Longlisted for the 2014 Samuel Johnson Prize for Nonfiction

Adam Nicolson sees the Iliad and the Odyssey as the foundation myths of Greek—and our—consciousness, collapsing the passage of 4,000 years and making the distant past of the Mediterranean world as immediate to us as the events of our own time. Homer's poems occupy, as Adam Nicolson writes "a third space" in the way we relate to the past: not as memory, which lasts no more than three generations, nor as the objective accounts of history, but as epic, invented after memory but before history, poetry which aims "to bind the wounds that time inflicts." The Homeric poems are among the oldest stories we have, drawing on deep roots in the Eurasian steppes beyond the Black Sea?. These poems, which ask the eternal questions about the individual and the community, honor and service, love and war, tell us how we became who we are.

Nicolson's spirited exploration illuminates our own indelible past. —Kirkus Starred Review
“Complex, personal, and profound…a brash and brave piece of writing… [The world of Nicolson’s] book, filled with the swords and spears that inflict the carnage of the Iliad, can change the way we see ours.” —Wall Street Journal
“Nicolson has written the book that was waiting to be written…a superbly written account of the poems.” —Times (London)
“Highly accessible…[Nicolson’s] globe-trotting passion for his subject is contagious…bringing the heroic age into our own.” —New York Times Book Review
“A hosanna to Homeric wandering and wanderlust…breathes new life into an ancient adventure.” —Observer (London)
“Stirring…Nicolson eloquently sums up what we still look for in Homer: ‘wisdom, his fearless encounter with the dreadful, his love of love and hatred of death, the sheer scale of his embrace, his energy and brightness, his resistance to nostalgia.’" —Washington Post
“If I have a serious complaint about this book, it’s that it threatens to be better than Homer—and I say this as a qualified classicist, who is supposed to be extensively trained for snottiness toward an amateur enthusiast like Nicolson.” —National Review
"[A] gracefully written and deeply informed book…Nicolson’s spirited exploration illuminates our own indelible past.” —Kirkus Reviews (starred review)
“In this passionate, deeply personal book, Nicolson explains why Homer matters—to him, to you, to the world—in a text full of twists, turns, and surprises.” —Publishers Weekly
"[A] sprawling, lyrical, and frequently intimate exploration…It is Nicolson’s passion for his subject that animates this selection and elevates textual explication into a paean.” —Booklist
“John Lee’s almost declamatory delivery blends well with the subject here…It’s in the lengthy quotations from Homer that Lee really shines, giving us a taste of what a bardic recitation might have sounded like. Even those not familiar with Homer should enjoy this, and those who are familiar will find much that is new.” —AudioFile

Adam Nicolson is a British author of nonfiction titles about history, landscape, literature, and the sea. Among his many awards and honors are the Somerset Maugham Award, the W. H. Heinemann Prize, the Scottish BAFTA, the Spears Book Award, the British Topography Prize, and others. He lives on a farm in Sussex with his wife and their five grown children.