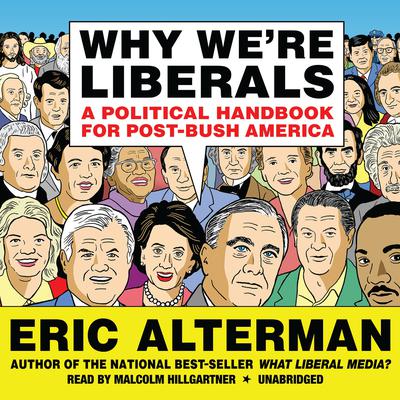 Why We're Liberals: A Political Handbook for Post-Bush America

Thanks to the machinations of the right, there is no dirtier word in American politics today than “liberal.” Yet public opinion polls consistently show that the majority of Americans hold liberal views on everything from health care to foreign policy.

In this feisty, accessible primer, Eric Alterman sets out to restore liberalism to its rightful honored place as the politics of America’s everyday citizens. In a crisply argued and extensively documented counterattack on right-wing spin and misinformation, Alterman briskly disposes of such canards as “Liberals Hate God” and “Liberals Are Soft on Terrorism,” reclaiming liberalism from the false definitions foisted upon it.

Why We’re Liberals is the perfect book for all of those ready to fight back against the conservative mud-slinging machine and claim their voice in the political debate.

“It is difficult to imagine anyone better qualified to update Arthur Schlesinger Jr.’s notion of liberalism as the ‘vital center’ of American politics.” —New York Times
“A vigorous defense of liberalism…Alterman argues persuasively.” —Atlantic
“[Alterman]…proves that not all liberals are wimps.” —Booklist
“A longtime cheerleader for progressive causes makes an enthusiastic…case that liberalism is poised to rise again.”   —Kirkus Reviews

Eric Alterman is a distinguished professor of English at the City University of New York Brooklyn College and holds a PhD in history from Stanford University. He is a columnist for The Nation magazine and the author of eleven books.