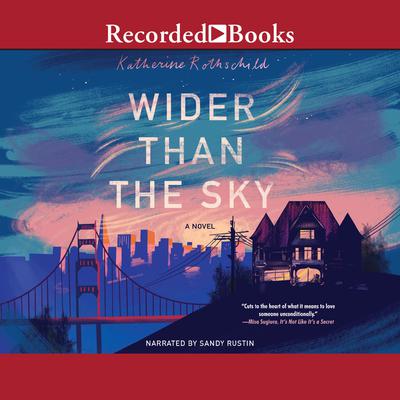 Wider Than the Sky

In the wake of sudden tragedy, twin sisters uncover a secret that rips open their world. Katherine Rothschild explores the pain and power of forgiveness in a stunning debut novel that will shatter your heart and piece it back together, one truth at a time.

Sixteen-year-old Sabine Braxton doesn’t have much in common with her identical twin, Blythe. When their father dies from an unexpected illness, each copes with the loss in her own way—Sabine by “poeting” (an uncontrollable quirk of bursting into poetry at inappropriate moments) and Blythe by obsessing over getting into MIT, their father’s alma mater. Neither can offer each other much support…at least not until their emotionally detached mother moves them into a ramshackle Bay Area mansion owned by a stranger named Charlie.

Soon, the sisters unite in a mission to figure out who Charlie is and why he seems to know everything about them. They quickly make a life-changing discovery: their father died of an HIV-related infection, Charlie was his lover, and their mother knows the whole story. The revelation unravels Sabine’s world, while practical Blythe seems to take everything in stride. Once again at odds with her sister, Sabine chooses to learn all she can about the father she never knew—and ultimately she must decide if she can embrace the legacy he wanted but kept hidden from his children.