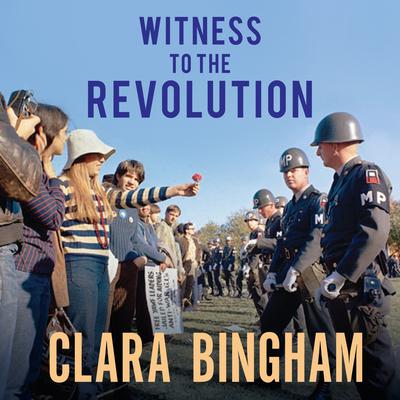 Witness to the Revolution: Radicals, Resisters, Vets, Hippies, and the Year America Lost Its Mind and Found Its Soul

As the 1960s drew to a close, the United States was coming apart at the seams. From August 1969 to August 1970, the nation witnessed nine thousand protests and eighty-four acts of arson or bombings at schools across the country. It was the year of the My Lai massacre investigation, the Cambodia invasion, Woodstock, and the Moratorium to End the War. The American death toll in Vietnam was approaching fifty thousand, and the ascendant counterculture was challenging nearly every aspect of American society. Witness to the Revolution, Clara Bingham's unique oral history of that tumultuous time, unveils anew that moment when America careened to the brink of a civil war at home, as it fought a long, futile war abroad.

Woven together from one hundred original interviews, Witness to the Revolution provides a firsthand narrative of that period of upheaval in the words of those closest to the action—the activists, organizers, radicals, and resisters who manned the barricades of what Students for a Democratic Society leader Tom Hayden called "the Great Refusal."

Bingham (Women on the Hill) assembles an impressive who's who of the activists, outlaws, and idealists who sought to bring America to its reckoning, for better or worse. —Publishers Weekly Starred Review

Clara Bingham is a former White House correspondent for Newsweek and author of Women on the Hill: Challenging the Culture of Congress. A graduate of Harvard, she has written for Talk, Vogue, Harper’s Bazaar, and Washington Monthly.