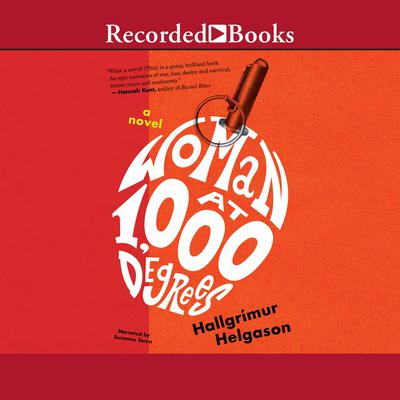 "I live here alone in a garage, together with a laptop computer and a hand grenade. It's pretty cozy." And . . . she's off. Eighty-year-old Herra Bjornsson, one of the most original narrators in literary history, takes readers along with her on a dazzling ride of a novel that spans the events and locales of the twentieth century. As she lies alone in that garage in the heart of Reykjavik, waiting to die, Herra reflects--in a voice by turns darkly funny, bawdy, poignant, and always, always smart--on the mishaps, tragedies, and turns of luck that took her from Iceland to Nazi Germany, from the United States to Argentina and back to a post-crash, high-tech, modern Iceland. Born to a prominent political family, Herra's childhood begins in the idyllic islands of western Iceland. But when her father makes the foolish decision to cast his lot with a Hitler on the rise, she soon finds herself abandoned and alone in war-torn Europe, relying on only her wits and occasional good fortune to survive. For Herra is, ultimately, a fierce survivor, a modern woman ahead of her time who is utterly without self-pity despite the horrors she has endured. With death approaching, she remembers the husbands and children she has loved and lost, and tries, for the first time, to control her own fate by defying her family's wishes and setting a date for her cremation--at a toasty temperature of 1,000 degrees. Each chapter of Herra's story is a piece of a haunting puzzle that comes together beautifully in the book's final pages. Originally published in Icelandic and based on a real person whom author Hallgrimur Helgason encountered by chance, Woman at 1,000 Degrees was a bestseller in Germany, France, and Denmark, and has been compared to "John Irving on speed." But it is deeply moving as well, the story of a woman swept up by the forces of history. With echoes of All the Light We Cannot See and The 100-Year-Old Man Who Climbed Out the Window and Disappeared, as well as European tours de force such as The Tin Drum, Woman at 1,000 Degrees is, ultimately, original, introducing a fresh new voice to American audiences. Author bio: Hallgrimur Helgason was born in Reykjavik, Iceland, in 1959. He started out as an artist and debuted as a novelist in 1990, gaining international attention with his third novel, 101 Reykjavik, which was translated into fourteen languages and made into a film. He has thrice been nominated for the Nordic Council Literature Prize, including for his novel Woman at 1,000 Degrees. Also a columnist and a father of three, he now divides his time between Reykjavik and Hrisey Island.

Hallgrimur Helgason made his debut as a novelist in 1990 and gained international attention with his third novel, 101 Reykjavik, which was made into a film starring Victoria Abril. In 2001 Helgason received the Icelandic Literary Prize. He also has twice been nominated for the Nordic Council Literature Prize, with 101 Reykjavik in 1999, and Stormland in 2007. A father of three, he divides his time between Reykjavik and Hrísey Island.