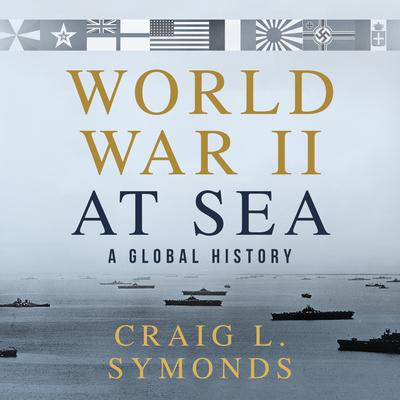 Opening with the 1930 London Conference, Symonds shows how any limitations on naval warfare would become irrelevant before the decade was up, as Europe erupted into conflict once more and its navies were brought to bear against each other. World War II at Sea offers a global perspective, focusing on the major engagements and personalities and revealing both their scale and their interconnection: the U-boat attack on Scapa Flow and the Battle of the Atlantic; the "miracle" evacuation from Dunkirk and the pitched battles for control of Norway fjords; Mussolini's Regia Marina-at the start of the war the fourth-largest navy in the world-and the dominance of the Kidö Butai and Japanese naval power in the Pacific; Pearl Harbor then Midway; the struggles of the Russian Navy and the scuttling of the French Fleet in Toulon in 1942; the landings in North Africa and then Normandy. Here as well are the notable naval leaders-FDR and Churchill, both self-proclaimed "Navy men," Karl Dönitz, François Darlan, Ernest King, Isoroku Yamamoto, Erich Raeder, Inigo Campioni, Louis Mountbatten, William Halsey, as well as the hundreds of thousands of seamen and officers of all nationalities whose live were imperiled and lost during the greatest naval conflicts in history.

Craig L. Symonds is professor emeritus at the United States Naval Academy where he taught naval history and Civil War history for thirty years. A native of Anaheim, California, he earned his BA degree at UCLA, and his master’s and PhD degrees from the University of Florida, where he studied under the late John K. Mahon. In the 1970s he was a US Navy officer and the first ensign ever to lecture at the prestigious Naval War College in Newport, Rhode Island. After his naval service, he remained at the War College as a civilian professor of strategy from 1974–1975.