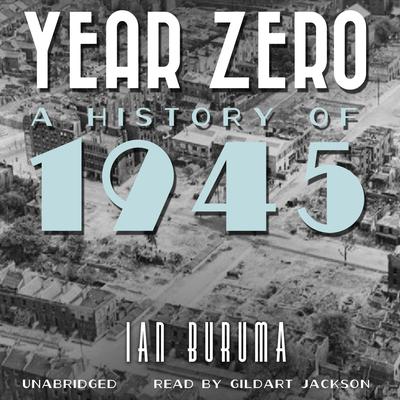 A 2014 ALA Notable Book for Adult Nonficiton

Year Zero is a landmark reckoning with the great drama that ensued after war came to an end in 1945. One world had ended and a new, uncertain one was beginning. Regime change had come across Asia and all of continental Europe. It was the greatest global power vacuum in history, and out of the often vicious power struggles that ensued emerged the modern world as we know it.

In human terms, the scale of transformation is almost impossible to imagine. Great cities around the world lay in ruins, their populations decimated, displaced, starving. Harsh revenge was meted out on a wide scale, and the ground was laid for much darkness to come. At the same time, in the wake of unspeakable loss, the euphoria of the liberated was extraordinary, the revelry unprecedented. The postwar years gave rise to the European welfare state, the United Nations, American democracy, Japanese pacifism, and the European Union. Society-wide reeducation was imposed on the vanquished on a scale that had no historical precedent. Much that was done was ill-advised, but in hindsight these efforts were relatively enlightened, humane, and effective.

A poignant grace note throughout his history is Buruma's own father's story. Seized by the Nazis during the occupation of Holland, he spent much of the war in Berlin as a slave laborer and by war's end was literally hiding in the rubble of a flattened city, having barely managed to survive starvation rations, Allied bombing, and Soviet shock troops when the end came. His journey home and attempted reentry into "normalcy" stand in many ways for his generation's experience.

A work of enormous range and stirring human drama, conjuring both the Asian and European theaters with equal fluency, Year Zero is a book that Ian Buruma is perhaps uniquely positioned to write.

“Ian Buruma’s lively new history, Year Zero, is about the various ways in which the aftermath of the Good War turned out badly for many people and splendidly for some who didn’t deserve it. It is enriched by his knowledge of six languages, a sense of personal connection to the era (his Dutch father was a forced laborer in Berlin), and his understanding of this period from a book he wrote two decades ago that is still worth reading, The Wages of Guilt: Memories of War in Germany and Japan.” —New York Times Book Review
“A very human history.” —New Yorker
“Year Zero…covers a great deal of history without minimizing the complexity of the events and the issues. It is well written and researched, full of little-known facts and incisive political analysis. What makes it unique among hundreds of other works written about this period is that it gives an overview of the effects of the war and liberation, not only in Europe but also in Asia…A stirring account of the year in which the world woke up to the horror of what had just occurred and—while some new horrors were being committed—began to reflect on how to make sure that it never happens again.” —New York Review of Books
“[Buruma] makes a compelling case that many of the modern triumphs and traumas yet to come took root in this fateful year of retribution, revenge, suffering, and healing.” —Smithsonian
“Buruma presents a panoramic view of a global transformation and emphasizes common themes: exultation, hunger, revenge, homecoming, renewed confidence.” —Booklist
“Insightful meditation on the world’s emergence from the wreckage of World War II…Recounting the occupations of Germany and Japan and life in the Allied nations, Buruma finds that the war was a great leveler, eliminating inequalities in Great Britain and rooting out feudal customs and habits in Japan. Despite much longing for a new world under global government, postwar life was shaped not by moral ideals but by the politics of the Cold War. An authoritative, illuminating history/memoir.” —Kirkus Reviews
“Gripping, poignant and unsparing, Year Zero is worthy of its author in being at home in both Europe and Asia. It is a book at once deeply empathetic and utterly fair, marked by wisdom and great knowledge; the often personal tone inspired by the fate of his father, a Dutchman forced into German labor camps. In the face of so much horror, it is an astounding effort at deep comprehension. A superb book, splendidly written.” —Fritz Stern, university professor emeritus, Columbia University
“Year Zero is the founding moment of the modern era. Ian Buruma’s history of that moment is vivid, compassionate, and compelling…His story takes in the world: from Holland to Japan, and his heroes and heroines are the ordinary men and women who picked up the pieces of a broken world and put it back together for their children and grandchildren.” —Michael Ignatieff, Canadian author, academic, and former politician

Ian Buruma is the Henry R. Luce Professor of Democracy, Human Rights, and Journalism at Bard College. His books include The China Lover, Murder in Amsterdam, Occidentalism,God’s Dust, Behind the Mask, The Wages of Guilt, Bad Elements, and Taming the Gods.