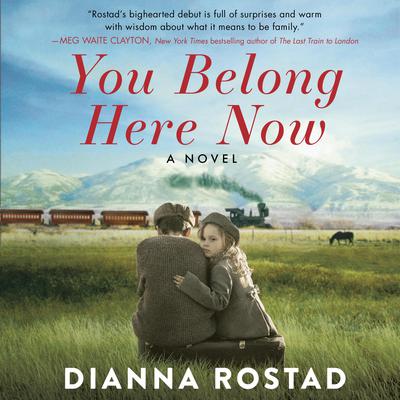 You Belong Here Now: A Novel

“It’s so hard to believe that this is a debut novel! It’s an historic novel. Talk about hitting me on so many good points.” –John Busbee, The Culture Buzz, weekly on www.KFMG.org

“Set against the harsh backdrop of Montana, You Belong Here Now is a novel as straightforward and powerful as the characters who populate it. I love this book, and I guarantee you won’t find a finer debut work anywhere.” — William Kent Krueger, New York Times bestselling author of This Tender Land

“You Belong Here Now distills the essence of the American spirit in this uplifting story. Perfect for book clubs looking to discuss the true meaning of family.” — Kathleen Grissom, New York Times bestselling author of The Kitchen House

In this brilliant debut reminiscent of William Kent Krueger's This Tender Land and Lisa Wingate's Before We Were Yours, three orphans journey westward from New York City to the Big Sky Country of Montana, hoping for a better life where beautiful wild horses roam free.

Montana 1925: Three brave kids from New York board the orphan train headed west. An Irish boy who lost his whole family to Spanish flu, a tiny girl who won’t talk, and a volatile young man who desperately needs to escape Hell’s Kitchen. They are paraded on platforms across the Midwest to work-worn folks and journey countless miles, racing the sun westward. Before they reach the last rejection and stop, the kids come up with a daring plan, and they set off toward the Yellowstone River and grassy mountains where the wild horses roam.

Fate guides them toward the ranch of a family stricken by loss. Broken and unable to outrun their pasts in New York, the family must do the unthinkable in order to save them.

Nara, the daughter of a successful cattleman, has grown into a brusque spinster who refuses the kids on sight. She’s worked hard to gain her father’s respect and hopes to run their operation, but if the kids stay, she’ll be stuck in the kitchen.

Nara works them without mercy, hoping they’ll run off, but they buck up and show spirit, and though Nara will never be motherly, she begins to take to them. So, when Charles is jailed for freeing wild horses that were rounded up for slaughter, and an abusive mother from New York shows up to take the youngest, Nara does the unthinkable, risking everything she holds dear to change their lives forever.

“From the moment the reader steps on the train with these orphaned children, You Belong Here Now shows how beauty can emerge from even the darkest places.” —Erika Robuck, national bestselling author of Hemingway’s Girl

“Rostad’s bighearted debut is full of surprises, and warm with wisdom about what it means to be family.” —Meg Waite Clayton, New York Times bestselling author of The Last Train to London

“You Belong Here Now shows how beauty can emerge from even the darkest places.” —Erika Robuck, author of Hemingway’s Girl