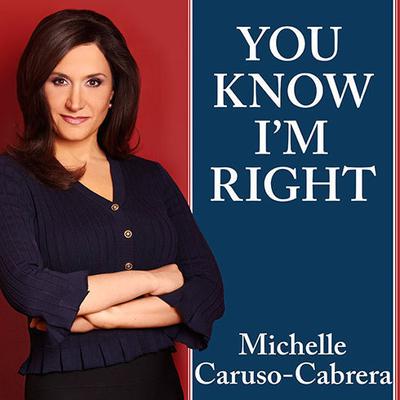 As the popular anchor of CNBC's daily news show Power Lunch, Michelle Caruso-Cabrera puts a new spin on conservatism. Now, in You Know I'm Right, Caruso-Cabrera presents a modern and smart approach to correcting the economic woes of the nation. Denouncing the hypocrites, she calls out the radicals on both sides of the spectrum who have frustrated voters and left fiscally conservative but socially liberal Americans feeling like a people without a party. Caruso-Cabrera maintains that by focusing on socially invasive policies, our country has lost its course. The answer is less government, not more; less spending, not more; and getting the government to stay out of our pocketbooks and out of our private lives. You Know I'm Right addresses the problems created by government overreach and speaks to the minds and hearts of nostalgic Republicans—those who believe in the strategy and approach used by Ronald Reagan. But it will also appeal to Clinton-era Democrats frustrated by the current level of exorbitant spending and excessive interference in the economy. Citing faults with both political parties, Caruso-Cabrera puts a magnifying glass on government structure, healthcare, and education, underscoring how we have gone wrong and, more important, where we need to go for a secure and prosperous future.

Michelle Caruso-Cabrera is an award-winning financial television journalist whose career spans twenty years. She has interviewed the world’s most compelling newsmakers, from Carlos Slim, one of the richest men in the world, to Venezuelan president Hugo Chavez, one of the most despised dictators. Previously, she was a monthly contributor to People en Español. Caruso-Cabrera has been awarded Broadcaster of the Year by the National Association of Hispanic Journalists and was named one of the 100 Most Influential Hispanics in the country by Hispanic Business Magazine. She is a graduate of Wellesley College, where she earned a degree in economics.