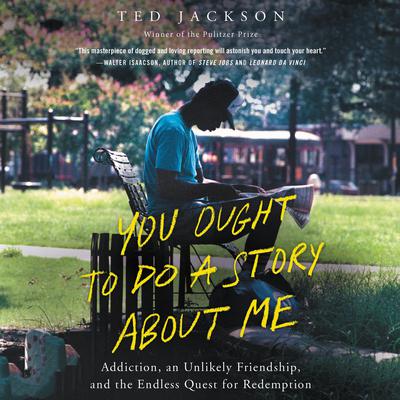 You Ought To Do a Story About Me: Addiction, an Unlikely Friendship, and the Endless Quest for Redemption

A Today Show Pick of the Best Books of the Month

In 1990, while covering a story about homelessness for the New Orleans Times-Picayune, Ted Jackson encountered a drug addict sleeping under a bridge. After snapping a photo, Jackson woke the man. Pointing to the daily newspaper by his feet, the homeless stranger looked the photojournalist in the eye and said, “You ought to do a story about me.” When Ted asked why, he was stunned by the answer. “Because, I’ve played in three Super Bowls.”

That chance meeting was the start of Ted’s thirty-year relationship with Jackie Wallace, a former NFL star who rose to the pinnacle of fame and fortune, only to crash and lose it all. Getting to know Jackie, Ted learned the details of his life, and how he spiraled into the “vortex of darkness” that left him addicted and living on the streets of New Orleans.

Ted chronicles Jackie’s life from his teenage years in New Orleans through college and the NFL to the end of his pro career and the untimely death of his mother—devastating events that led him into addiction and homelessness. Throughout, Ted pays tribute to the enduring friendship he shares with this man he has come to know and also look at as an inspiration. But Ted is not naïve; he speaks frankly about the vulnerability of such a relationship: Can a man like Jackie recover, or is he destined to roam the streets until his end?

Tragic and triumphant, inspiring and unexpected, You Ought to Do a Story About Me offers a rare glimpse into the precarious world of homelessness and the lingering impact of systemic racism and poverty on the lives of the citizens of New Orleans. Lyrical and evocative, Ted’s account is pure, singular, and ambitious—a timeless tale about loss, redemption, and hope in their multifarious forms.

“This book will melt your heart. The story of Jackie Wallace is an unforgettable tale of hope, grace, and the miracle of the human spirit. Ted Jackson writes with searing honesty and deep love for a troubled man who started as his subject and became his lifelong friend.” —Jonathan Eig, bestselling author of Ali
“This masterpiece of dogged and loving reporting will astonish you and touch your heart. The struggles and quest for redemption of football star Jackie Wallace make for a fall-from-grace tale that’s both unsettling and uplifting.” —Walter Isaacson, #1 New York Times bestselling author
“Consistently complex and absorbing…A rich and rewarding narrative about the possibilities—and the challenges—of redemption.” —Kirkus Reviews (starred review)

Ted Jackson is a Pulitzer Prize-winning photojournalist who has spent nearly thirty-four years with New Orleans’s The Times-Picayune. Through the years, he has covered the physical destruction and emotional trauma of earthquakes and hurricanes. For their coverage, The Times-Picayune staff won a Pulitzer Prize for public service and another for breaking news. His work has appeared in newspapers, magazines, and books around the world including The New York Times, The Washington Post, Newsweek, Time, and National Geographic. He has appeared in interviews on the CBS Morning Show, ABC, CNN, Fox News, and NBC with Dan Rather and Lester Holt, has been interviewed multiple times on NPR, and was one of three subjects featured in a documentary on Hurricane Katrina on The Weather Channel’s Hurricane 360. In spring 2017, he was named the first-ever recipient of the Jim Amoss Award, named for the long-time executive editor of The Times-Picayune, in recognition for “extraordinary photojournalism, video production and feature writing…For timeless journalism that has earned the trust of the community and the respect of your colleagues.”