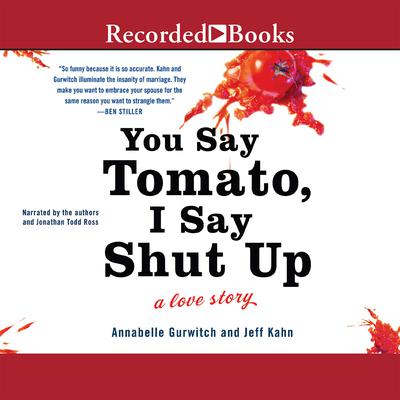 You Say Tomato, I Say Shut Up: A Love Story

In this hilarious and ultimately moving memoir, comedians and real-life married couple Annabelle Gurwitch and Jeff Kahn prove that in marriage, all you need is love-and a healthy dose of complaining, codependence, and pinot noir. After thirteen years of being married, Annabelle and Jeff have found "We're just not that into us." Instead of giving up, they've held their relationship together by ignoring conventional wisdom and fostering a lack of intimacy, by using parenting as a competitive sport, and by dropping out of couples therapy. The he-said/she-said chronicle of their intense but loving marriage includes an unsentimental account of the medical odyssey that their family embarked upon after their infant son was diagnosed with VACTERL, a very rare series of birth defects. Annabelle and Jeff's unforgivingly raw, uproariously funny story is sure to strike both laughter and terror in the hearts of all couples (not to mention every single man or woman who is contemplating the connubial state). Serving up equal parts sincerity and cynicism, You Say Tomato, I Say Shut Up is a laugh-out-loud must-read for everyone who has come to realize that being "in love" can only get you so far.

Annabelle Gurwitch is an actress and writer, known for her years cohosting Dinner and a Movie on TBS and Fired!, both a book and documentary. She’s been a regular commentator on NPR and online columnist for The Nation. Currently, she hosts the series WA$TED on Planet Green Network. She lives with her husband, Jeff Kahn, and their son in Los Angeles.

Jeff Kahn won an Emmy Award for his writing on The Ben Stiller Show. As an actor, he has appeared in The 40-Year-Old Virgin and Tropic Thunder, as well as the HBO series Curb Your Enthusiasm and Entourage. He lives with his wife Annabelle Gurwitch in Los Angeles.