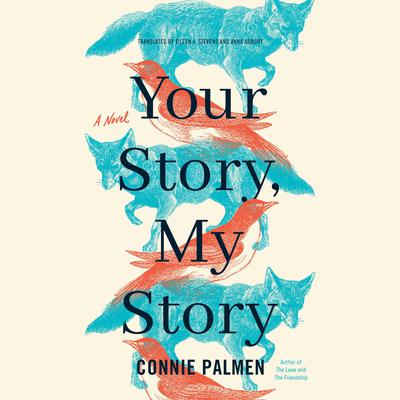 Your Story, My Story: A Novel

From the award-winning author of The Friendship comes a shattering, brilliantly inventive novel based on the volatile true love story of literary icons Sylvia Plath and Ted Hughes.

In 1963 Sylvia Plath took her own life in her London flat. Her death was the culmination of a brief, brilliant life lived in the shadow of clinical depression—a condition exacerbated by her tempestuous relationship with mercurial poet Ted Hughes. The ensuing years saw Plath rise to martyr status while Hughes was cast as the cause of her suicide, his infidelity at the heart of her demise.

For decades, Hughes never bore witness to the truth of their marriage—one buried beneath a mudslide of apocryphal stories, gossip, sensationalism, and myth. Until now.

In this mesmerizing fictional work, Connie Palmen tells his side of the story, previously untold, delivered in Ted Hughes’s own uncompromising voice. A brutal and lyrical confessional, Your Story, My Story paints an indelible picture of their seven-year relationship—the soaring highs and profound lows of star-crossed soul mates bedeviled by their personal demons. It will forever change the way we think about these two literary icons.

“Enthralling…Palmen’s prose is beautiful and neither condemns nor exculpates Hughes. Palmen took on a tall order with this one, and does an admirable job of delivering.” —Publishers Weekly
“Like witnessing Ted Hughes, the poet himself, rising from the dead and disclosing his version of his legendary marriage to American poet Sylvia Plath. —AudioFile Magazine
Connie Palmen’s Your Story, My Story is a lacerating portrait of passion and genius, both of which are gifts that can arrive with mortality hidden in their folds. It does what only a novel can do—probes beneath the ‘official’ story to get to the dark and mysterious heart of the matter. It’s a remarkable book. —Michael Cunningham, Pulitzer Prize-winning author of The Hours
Enthralling…Palmen’s prose is beautiful and neither condemns nor exculpates Hughes. Palmen took on a tall order with this one, and does an admirable job of delivering. —Publishers Weekly
Brilliantly gives voice to Ted Hughes…Palmen brings incredible emotion and life to these two renowned poets and embodies Hughes fully. This confessional will challenge readers to see Ted Hughes and his story in a different light. —Booklist
The careful, vivid language of Your Story, My Story makes it rewarding reading. —Los Angeles Review of Books
Dutch author Connie Palmen’s latest novel, Your Story, My Story, translated by Eileen J. Stevens and Anna Asbury, uses Plath and Hughes’s ill-fated marriage as a vehicle for larger questions about lust, loyalty, and grief…Palmen, Stevens, and Asbury have achieved remarkable success in bringing Hughes’s literary voice to the page; reading Your Story, My Story feels like reading straight from Hughes’s diary. The prose is lovely, the emotions raw…engrossing…Palmen, Stevens, and Asbury replicate Hughes’s writing style with startling authenticity, and Palmen deftly draws out internal conflict in her characters…the craftsmanship is undeniable. —Asymptote Journal
Palmen cleverly asserts her talent, as she delves into a poetic narrative akin to Hughes’s own voice as he tries to keep up with the quickly changing moods of his wife, who is every extreme of fury, wit, and passionate goddess all in one. Palmen takes us into Hughes’s mind to see things from his perspective, playing devil’s advocate, hoping to shed some light on his own personal truth and to show that there are always two sides to a story. —Paperback Paris
With the outcome known from the start, it’s the path we follow to get there that makes this beautifully written ode to Ted Hughes and Sylvia Plath so engrossing and emotional: a love story of euphoric joy and acute sorrow. Filled with literary references and written like a daily journal, its private intimacy is like being inside Hughes’s head, with all notion of a story, written and translated by strangers, forgotten. —Historical Novels Review
Speaking as Hughes, in his distinctive style (life is mainly nature wondering what to attack next), Dutch novelist Palmen provides a version of events from his side…In running through the events of their tumultuous pairing, with Plath’s mental illness relentless in its demands, Palmen asks if their relationship was doomed all along. —Strong Words Magazine