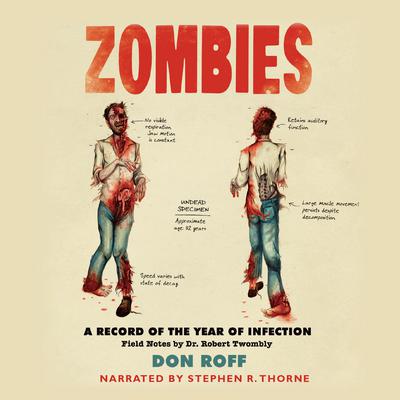 Zombies: A Record of the Year of Infection

The year is 2011, and what starts as a pervasive and inexplicable illness ends up as a zombie infestation that devastates the world’s population. Taking the form of a biologist’s journal found in the aftermath of the attack, this pulse-pounding, suspenseful tale of zombie apocalypse follows the narrator as he flees from city to countryside and heads north to Canada, where he hopes the undead will be slowed by the colder climate. Encountering scattered humans and scores of the infected along the way, he fills his notebook with descriptions and careful observations of zombie behavior, along with terrifying tales of survival. This frightening contribution to the massively popular zombie resurgence will keep fans on the edge of their seats right up to the very end.

Don Roff worked at the local drive-in theater and made Super 8 mm movies with his neighborhood friends, writing many of the scripts. He joined the United States Army in 1989, and was stationed at Fort Benning, Georgia, in the 3rd Ranger Battalion. He was a part of “Operation Just Cause” in Rio Hato, Panama, December 20, 1989. In June 2006 Roff received the prestigious Zola Award for screenwriting from the Pacific Northwest Writers Association for his science fiction adventure script, Outbound.