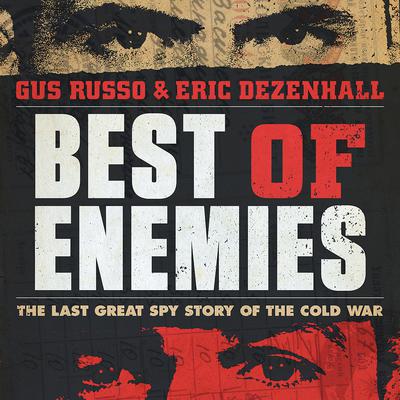 Best of Enemies: The Last Great Spy Story of the Cold War

By Gus Russo  and Eric Dezenhall
Read by Robert Petkoff

The thrilling story of two Cold War spies—CIA case officer Jack Platt and KGB agent Gennady Vasilenko—and their improbable friendship at a time when they should have been anything but.

In 1978, CIA maverick Jack Platt and KGB agent Gennady Vasilenko were new arrivals on the Washington, DC intelligence scene, with Jack working out of the CIA’s counterintelligence office and Gennady out of the Soviet Embassy. Both men, already notorious iconoclasts within their respective agencies, were assigned to seduce the other into betraying his country in the urgent final days of the Cold War, but instead the men ended up becoming the best of friends—blood brothers. Theirs is a friendship that never should have happened, and their story is chock full of treachery, darkly comic misunderstandings, bureaucratic inanity, the Russian Mafia, and landmark intelligence breakthroughs of the past half century.

In Best of Enemies, two espionage cowboys reveal how they became key behind-the-scenes players in solving some of the most celebrated spy stories of the twentieth century, including the crucial discovery of the Soviet mole Robert Hanssen, the 2010 Spy Swap which freed Gennady from Soviet imprisonment, and how Robert De Niro played a real-life role in helping Gennady stay alive during his incarceration in Russia after being falsely accused of spying for the Americans. Through their eyes, we see the distinctions between the Russian and American methods of conducting espionage and the painful birth of the new Russia, whose leader, Vladimir Putin, dreams he can roll back to the ideals of the old USSR.

“A compelling Cold War fable that illuminates the essence of a human recruitment operation: the unshakable friendship between two men that endured in the Wilderness of Mirrors.” —Jason Matthews, New York Times bestselling author
“The ultimate true-life spy tale. Gus Russo and Eric Dezenhall have written a rollicking Cold War thriller centered around the most crazily improbable of friendships…Russo and Dezenhall’s deep reporting, including interviews with the spies themselves, proves again that fiction has nothing on truth…Important and entertaining.” —Philip Shenon, New York Times bestselling author

Gus Russo has been an investigative reporter for over twenty years, the author of six nonfiction books, and writer and/or producer of many national and international documentaries for major networks. His books have received Book of the Month Club and History Book Club Featured Selections, three have been optioned for films, and The Outfit was a Pulitzer nominee. Russo was a professional musician, composer, bandleader, and private instructor. In that incarnation, he played with, or in tandem with, many well-known acts. He currently feeds his musical passions as leader of the Baltimore-based sextet, “String Theory,” which features songs by Django Reinhardt, Johnny Mercer, Dan Hicks, and Nat King Cole.

Eric Dezenhall is the founder and CEO of Dezenhall Resources, Ltd., one of the nation’s leading crisis management firms. He is also a published author of fiction and nonfiction books, a frequent media commentator, and a sought-after speaker. Eric has written numerous articles written on damage control in publications including the New York Times, Washington Post, Wall Street Journal, Los Angeles Times, New Republic, Daily Beast, Daily Caller, Ethical Corporation, and Huffington Post. He coproduced a documentary on organized crime for the Discovery Channel and appears as organized crime historian in forums including the History Channel. Dezenhall is a graduate of Dartmouth College.