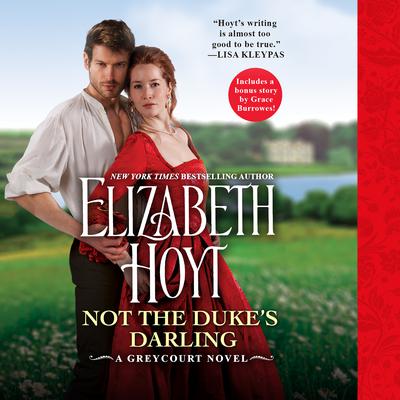 Not the Duke’s Darling

An Amazon Best Book of the Month Selection in Romance

Freya de Moray is many things: a member of the secret order of Wise Women, the daughter of disgraced nobility, and a chaperone living under an assumed name. What she is not is forgiving. So when the Duke of Harlowe—the man who destroyed her brother and led to the downfall of her family—appears at the country house party she’s attending, she does what any Wise Woman would do: she starts planning her revenge.

Christopher Renshaw, the Duke of Harlowe, isn’t best pleased to be blackmailed into attending a house party … and that was before he recognizes Freya. She’s fiery, bold, and sensuous—in short, maddening. But she also reminds him of the sins of his past—sins he’d much rather forget. When it becomes clear Freya is in grave danger from someone at the gathering, he knows he will do anything to keep her safe. But first Renshaw will have to ferret out Freya’s secrets-by whatever means necessary.

Elizabeth Hoyt is the author of three critically acclaimed historical romance series. Her books have been finalists four times in Romance Writers of America’s prestigious RITA award contest, have won two Romantic Times Reviewer’s Choice Awards, and were nominated for a third. All of her books have received Top Pick reviews from RT Book Reviews magazine. Both Wicked Intentions and Notorious Pleasures received starred reviews from Publishers Weekly. Four of her books were voted into All About Romance’s (AAR’s) Top 100 Romances of All Time list and six were Desert Isle Keepers at AAR. Her books have been translated into twelve languages.