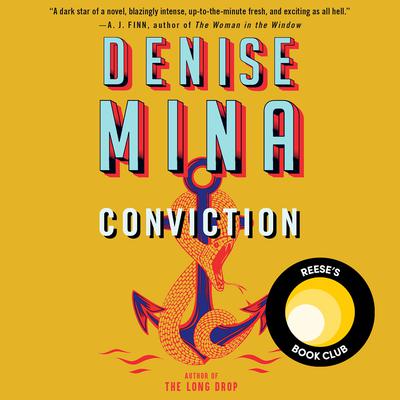 Longlisted for the 2019 McIlvanney Prize

A Reese’s Book Club Pick of the Month

A Publishers Weekly Best Book of the Year in Mysteries & Thrillers

A Crime Reads Pick of Best Crime Novels of Summer

A true-crime podcast sets a trophy wife’s present life on a collision course with her secret past in the “blazingly intense, exciting as all hell” (A. J. Finn) new thriller from Denise Mina.

The day Anna McDonald’s quiet, respectable life exploded started off like all the days before: Packing up the kids for school, making breakfast, listening to yet another true crime podcast. Then her husband comes downstairs with an announcement, and Anna is suddenly, shockingly alone.

Reeling, desperate for distraction, Anna returns to the podcast. Other people’s problems are much better than one’s own — a sunken yacht, a murdered family, a hint of international conspiracy. But this case actually is Anna’s problem. She knows one of the victims from an earlier life, a life she’s taken great pains to leave behind. And she is convinced that she knows what really happened.

Then an unexpected visitor arrives on her front stoop, a meddling neighbor intervenes, and life as Anna knows it is well and truly over. The devils of her past are awakened — and in hot pursuit. Convinced she has no other options, she goes on the run, and in pursuit of the truth, with a washed-up musician at her side and the podcast as her guide.

“Mesmerizing: a tightly woven thriller that deftly combines psychological suspense with dark humor and international intrigue.” —Alafair Burke, New York Times bestselling author
“Mina, queen of the Scottish crime novel, is in stellar form here.” —People
A page-turner with depth and soul. —O, the Oprah Magazine
“Endlessly surprising…[An] incredible novel.” —New York Times Book Review
Conviction combines all [Mina's] gifts -- for suspense, humor, menace, sentiment -- in spectacular fashion. —Wall Street Journal
“Daredevil storytelling at its finest.” —NPR
"Spectacular. If you, dear reader, can sanely spread your enjoyment of it out over, say, a week, you're a more disciplined consumer of suspense fiction than I am. I inhaled this novel in two extended sittings in one day. —Washington Post
Conviction feels as fresh as a fall breeze... I sat up VERY late reading this one, dazzled by how effortlessly Mina spun a complex web. —Seattle Times
[An] edgy but humorous crime novel. —Christian Science Monitor
[An] ingenious cheeky cracker of a thriller —Minneapolis Star Tribune
“A sparkling standalone ..Conviction is a whirlwind, in the finest way.” —Mystery Scene
“[A] mad-cap adventure of two lost souls on the run…and into their own past traumas.” —Crime Reads
“A compelling, complex thriller as modern as tomorrow.” —Kirkus Reviews (starred review)
“With a gutsy, endearing heroine and a wondrously surprising ending, this is highly recommended.” —Library Journal (starred review)
“Mina delivers a metafictional marvel that both endorses and exemplifies the power of storytelling.” —Publishers Weekly (starred review)
"{A] suspenseful, humorous, and surprisingly hopeful ode to storytelling…Mina’s longtime fans will happily recognize traces of Paddy Meehan’s snarky survivors’ nature as Anna chain-smokes her way toward a satisfying showdown.” —Booklist (starred review)