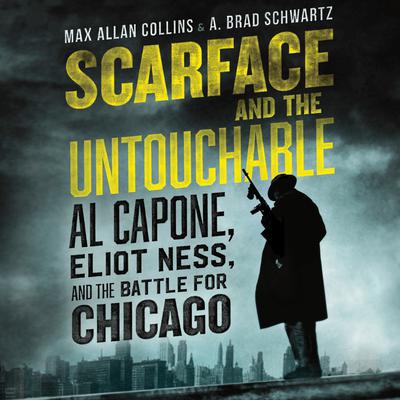 Scarface and the Untouchable: Al Capone, Eliot Ness, and the Battle for Chicago

A Chicago Public Library Best of the Best selection

A Mystery Writers of America “Grand Master”—author of the gangster classic Road to Perdition, long-time Dick Tracy writer, and multiple Shamus Award winner—teams with an acclaimed rising young historian, in this riveting, myth-shattering dual portrait of Al Capone, America’s most notorious gangster, and Eliot Ness, the legendary Prohibition agent whose extraordinary investigative work crippled his organization. Written with novelistic pacing and underpinned by groundbreaking research, Max Allan Collins and A. Brad Schwartz's Scarface and the Untouchable delivers—at last—the definitive account of the “Battle for Chicago,” the iconic struggle between the mythic yet real combatants who have captivated the world for 90 years.

“Revolutionizes our understanding of Al Capone and Eliot Ness beyond myths and misinformation with groundbreaking research and effortless storytelling that will thrill historians and general readers alike.” —Matthew Pearl, New York Times bestselling author
“The telling is so expertly done, it’s hard to resist.” —Seattle Times
“A gripping take on Chicago’s past that reads like a novel.” —Chicago magazine
“A definite account. Masterfully written.” —CrimeReads
“This audiobook is a fascinating examination of the terrible times when the Mob ruled Chicago, with Stefan Rudnicki doing a pretty solid job of substituting for Walter Winchell’s staccato “Untouchables” delivery…The chronological work follows the lives of the two men and is impossible to turn off. Winner of the AudioFile Earphones Award.” —AudioFile
“Collins and Schwartz present a balanced view of the role of Ness in capturing Capone…The result is an informed and valuable addition to the numerous books about Capone and Ness.” —Publishers Weekly
“A gritty dual biography reveals the underworld of crime and corruption in 1920s and ’30s America…A fast-paced tale related with novelistic drama.” —Kirkus Reviews